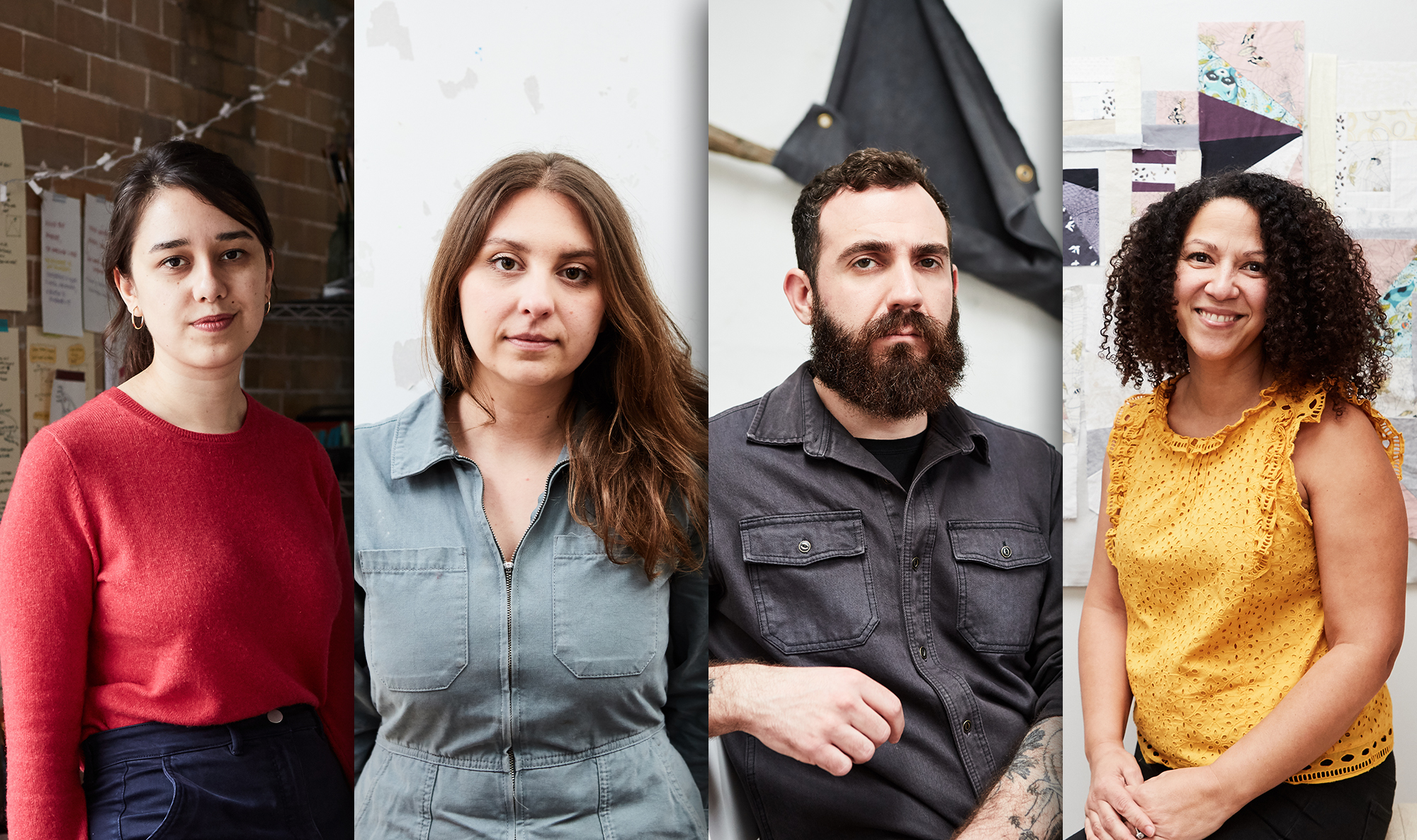 Antohe, Levaque, Lenard and Castellano represent the first cohort of artists in the VisArts Artist Residency Program, which was launched in 2019. Funded in part by a grant from the National Endowment for the Arts and the Windgate Foundation, the program makes it possible for the center to invite several artists to spend 11 months making new work in private studios.

Soft Pleats is the culmination of the 2019-20 program and the show was curated by Margaret Meehan.

“Over the course of the last year, these artists used the space and resources at VisArts to develop their creative practices and make work that speaks of lineage, inheritance and community in spite of pandemic isolation,” Meehan said. “Art is always at the forefront of hope. It’s an antidote to the reality of the day. These residents and the exhibition Soft Pleats are examples of why we must keep creating and dreaming (whether in objects or words) of a brighter future.”

A portion of the residents’ time in the program occurred during the COVID-19 pandemic and the national outcry against anti-Black violence. While these issues and the pandemic are not the dominant subject matter of the residents’ work, they played an important role for the artists in the final months leading up to the installation of Soft Pleats, according to Meehan.

“As much as the world may change artists and art will continue to evolve and remain,” Meehan said. “The exhibition Soft Pleats is about the hopeful act of creating in the midst of struggling to process our times.”

Diana Antohe: Antohe received an MFA in Painting + Printmaking from Virginia Commonwealth University in 2019 and a BFA in Studio Art from Southern Methodist University in 2014. She has held residencies at Künstlerhaus Bethanien in Berlin, Can Serrat Center in El Bruc, Spain, the Vermont Studio Center in Johnson, Vt., and the London Summer Intensive in London, England.

Nicole Levaque: Levaque holds an MFA in Sculpture and Extended Media from Virginia Commonwealth University and a BFA in painting from Concordia University in Tio’tiá:ke (Montreal), Quebec. She held the sculpture practicum position at the Banff Centre for Arts and Creativity in Banff, Alberta. Levaque is a founding member of the studio collective, Casino, based in Hamilton, Ontario.

William Lenard: Lenard received his BFA from Rhode Island School of Design in Furniture Design in 2014 and his MFA from Virginia Commonwealth University in Craft and Material Studies in 2018. He has held residencies at the Wassaic Project in Wassaic, NY and the Vermont Studio Center in Johnson, VT. His work has been shown nationally at the Southeastern Center for Contemporary Art, the Moss Art Center, and Page Bond Gallery.

Rosa Castellano: Castellano is a Richmond-based writer and teacher originally from Tampa, Fla. She received an MFA in poetry from Virginia Commonwealth University. Her work has been published in The South Hampton Review and in 2017, she was a finalist for the Salem College Center for Women Writers’ Rita Dove Poetry Prize.

The September 18 opening reception included gallery viewing opportunities, a reading by Rosa Castellano as well as a panel featuring the artists.

About the Curator: Margaret Meehan’s work has been shown at ArtPace San Antonio, the Modern Art Museum of Fort Worth, The Dallas Museum of Art, Flowers Gallery in London, Conduit Gallery in Dallas, TX and Ulterior Gallery in New York. Awards and residencies include the Nasher Sculpture Center Microgrant (2015), Artpace International Residency (2014), The Lighthouse Works Residency (2013), Bemis Center for Contemporary Arts Residency (2009), Dozier Travel Grant from the Dallas Museum of Art (2008) and the Virginia Museum of Fine Arts Fellowship (2020). Meehan’s work has been featured in The Guardian, Sculpture Magazine, New American Paintings, and Artforum, among others.

About the Visual Arts Center of Richmond: The Visual Arts Center of Richmond (VisArts) has helped adults and children explore their creativity and make art since 1963. Each year, the organization touches the lives of nearly 45,000 people through its classes, exhibitions, community programs, camps, workshops and special events. Founded in Church Hill as the Hand Workshop, the organization moved to the historic Virginia Dairy building at 1812 West Main Street, where it leased space for 17 years before purchasing and later renovating the building. Completed in 2007, the renovation transformed the facility into an inviting and inspiring 30,000-square-foot art center, which includes the 1,800-square-foot True F. Luck Gallery. The gallery’s focus is on materials and processes of contemporary artists. Each year, VisArts offers more than 1,000 visual and creative arts classes in clay, wood, fiber, painting, photography, printmaking, glass, metal, drawing, writing, decorative arts and other visual media. More than 200 instructors teach for the organization. The Visual Arts Center of Richmond is generously supported by CultureWorks, the National Endowment for the Arts and the Virginia Commission for the Arts.