Where the Pieces Fall 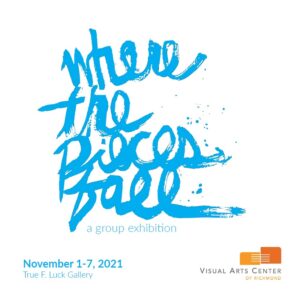 What happens when something falls apart? Do the pieces stand alone, forever separated? Can they be put back together and become something new? Where the Pieces Fall embodies the journey of 15 resident artists who have come from different places to get to the same place, like pieces of a puzzle. The Visual Arts Center of Richmond provided the space and opportunity for these artists to be inspired, form a community, and create together. Whether the artist had a planned direction, experimented, or was influenced by their fellow artists and the studio spaces, each individual journey led to the pieces of this diverse exhibition which celebrates the practices and new pieces that were cultivated during the residency. 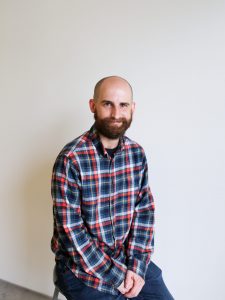 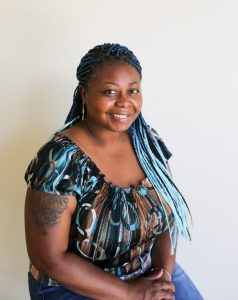 Unicia Buster
Unicia R. Buster is an award-winning artist from Richmond, Virginia. She creates stunning and unique compositions that challenge the cultural and social ideals of feminine beauty, the sociopolitical narrative around racism and black lives, and the human impact on environmental issues. Through the use of different media, including paint, textiles and photography, Unicia develops her ideas and perspectives over the course of many works to fully explore her subject. Her work spans more than 20 years and can be found in public and private collections.
uniciabuster.com 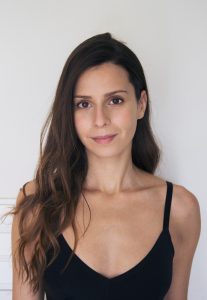 Jessica Da Silva
Born and raised in Luxembourg, Jessica Da Silva was pursuing Architecture studies in Innsbruck, Austria, when she discovered her passion for drawing. After graduating, she took the decision to study Visual Arts in France, where she obtained a Master’s degree at the University of Paris 1 Panthéon-Sorbonne.

Having a father who immigrated to Luxembourg from Portugal, she is interested in questions of home and displacement. Along with migration, the subject of nature constitutes the main element in her artworks. Rather poetic than scientific, she values the complexity of both nature and a migrant’s feelings. By deploying various media such as drawing, photography and installation, she questions our perception and relationship to the visible world.
www.dasilvajessica.com 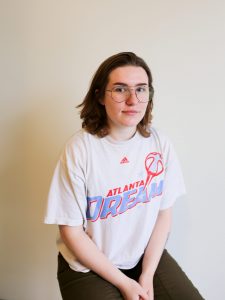 Aurele Gould
Aurele Gould is an image-maker based in Richmond, Virginia with a BFA in Photography from Virginia Commonwealth University received in 2019. They have also received the 2020-2021 Professional Fellowship Award from the VMFA and Distinguished Photographer Award from Alex Klein of the ICA Philadelphia. Weaving between a constructed reality and a lived experience, Gould’s images derive from a personal drive to create a thesaurus of visual language for non-men.
www.aurelegould.com 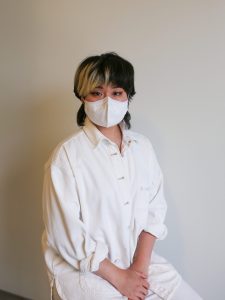 Erin Jhi
Erin Jhi is an illustrator from South Korea. Her studio practice uses traditional drawing and painting to reflect cultural taboos, differences, and experiences which emulate the conflicting emotions of belonging yet simultaneously out of place. Despite these conflicting emotions, her art is colorful, lighthearted, and whimsical. She is influenced by traditional Korean culture, modern art, religion, and pop culture. She likes to create art that can make people smile!
erinjhi.com 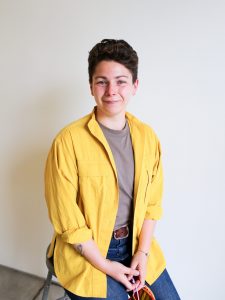 GM Keaton
GM Keaton is an artist, educator, and amateur ecologist living and working on Powhatan Land (Richmond, VA). Their expansive and mutable practice includes fiber work, installation, sound, video, movement, performance, interspecies collaboration, community building and meal-making. They received their BFA from Minneapolis College of Art and Design and their MFA from Virginia Commonwealth University. They’ve shown their work in artist-run spaces throughout the Midwest and East Coast, and are invested in building alternative models of art making and experiencing.
cargocollective.com/GMKeaton 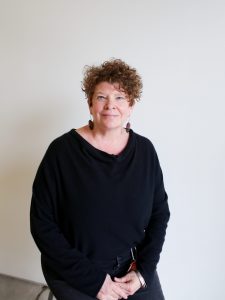 Bernadette Frerker Larimer
Bernadette Frerker Larimer is a ceramics artist currently living in Southern Virginia.  Bernadette received her BFA with an emphasis in ceramics from New Mexico State University in 2019. She is known for her psycho-whimsical anthropomorphic sculptures. Her work is the material expression of her deep love for nature, spirituality, and the divine feminine mystique. Working primarily with ceramics (earthenware, stoneware, and porcelain), she employs various slips, underglazes, glazes, and lusters. Her preferred techniques include coil-building and wheel throwing, as well as hand-building to create human and abstract forms. She also creates functional work with images of goddesses and other magical beings. Bernadette lived for nearly seven years in the high desert of New Mexico, whose stark beauty inspired her art. She recently relocated to the East Coast where – although a striking contrast to the high desert – she again draws inspiration from her surroundings, most notably the ocean, swamps, and forests.
instagram.com/bedazzled_b_daz_ 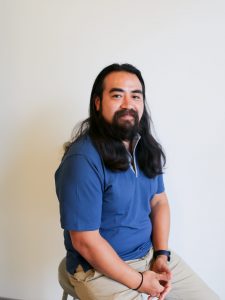 Pedro Ledesma III
Born in South Dakota and raised in a small town in Texas, Pedro has always appreciated wide, open spaces and small communities. His mixed Korean & Mexican heritage and extensive travel give him great appreciation for culture and family. His education at public schools in Texas, MIT in Cambridge, and Columbia University in NYC have opened the world to him, as have his experiences in investment banking, international development, and teaching. Forever a student, explorer, and teacher, Pedro is currently pursuing his MFA at Virginia Commonwealth University in Richmond, Va.
www.pedroledesmaiii.com 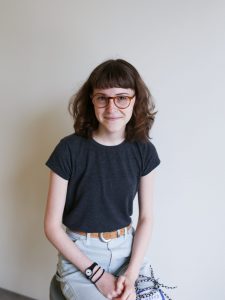 Eileen Morley
Eileen Morley (b. 2002), is a student, maker, and mender from Richmond, Va. Currently, an undergraduate at Virginia Commonwealth University majoring in Craft & Material Studies, Morley leans into her knowledge of crafts like knitting and sewing to interpret ideas around community, environmental healing, and the meditative and restorative act of creating.
eileenmorley.myportfolio.com 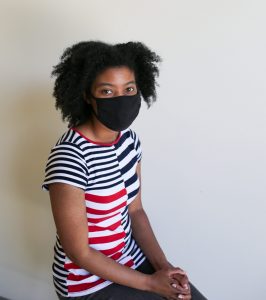 Kayla Payne
Kayla Payne is a recent graduate of the College of William and Mary with a B.A. in Art and Art History. She concentrates mainly on printmaking, illustration, and painting. One area of interest she likes to explore in her work is how narratives can be reinterpreted through varying viewpoints.
kayparty.portfoliobox.net 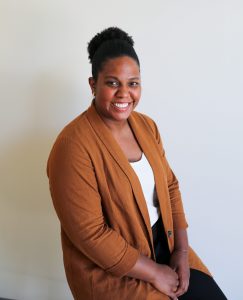 Kourtenay Plummer
Kourtenay graduated from the College of William and Mary in 2013 with a BA in Studio Art and a concentration in ceramics. In 2014, she graduated from William and Mary’s School of Education with a Master’s in Elementary Education. Since then, she’s been an elementary and middle school art teacher in the Hampton Roads area of Virginia. In addition to teaching children, she has also taught adult ceramic classes in Newport News.

Kourtenay is currently based in Richmond, Virginia. She has produced both sculptural and functional ceramics, however, her passion is making functional ceramics. The way form interacts with function is what drives her work and she is most attracted to organic forms with more fluid movement. Her inspiration often comes from the natural environment and the human body, mostly the female figure.
kourtenayplummerpottery.com 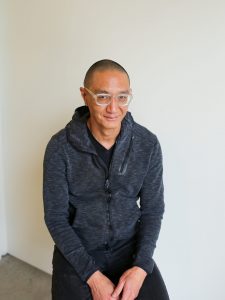 Oura Sananikone
Oura Sananikone has had work published in Punchline, Wadi, Chew on This, RVA Magazine, the Drama, and Makeout Creek as well as having shown in such galleries as Quirk, Gallery 5, ADA, and Plant Zero.  He also sells his paintings, comics, and custom toys at various comic book conventions and craft shows.  He has played in various bands and has a couple of murals in Richmond if you know where to look.  Oura plans to open a brick-and-mortar store soon and is slowly designing a video game.  You can find him on social media @ourasananikone and he is still your friend.
instagram.com/ourasananikone/ 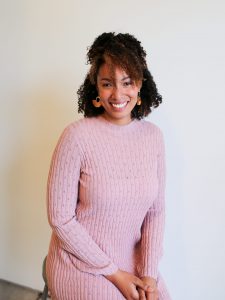 Raven Smith
As a young girl, Raven Smith loved gliding her scissors through construction paper to create beautifully arranged strips of colors that would then be turned into ringlets and form the longest, most colorful link chains her first-grade class would ever see. Since then, these childhood memories, practices, and habits have shaped her exploration of paper as a new medium.

Smith’s paper illustrations explore and take inspiration from observations of the natural world, how we interact with it and the raw essence of the subjects found there, ultimately allowing us to consider and rethink our relationship with natural spaces, flora and fauna.

Originally from Florida, Smith moved to Richmond in pursuit of a life of art and the outdoors. She finds inspiration when she is immersed in nature, so she has found a deep love for hiking and camping.
ravensmithart.com 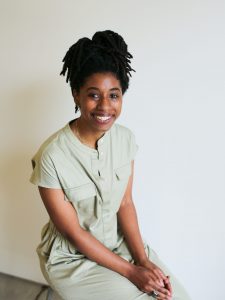 Karyn Vice
Karyn Vice is native to the Richmond area and uses visual art to embody and cultivate joy. She has a B.S. from Virginia Commonwealth University in Urban and Regional Studies + Environmental Studies and professionally, Vice has worked in the nonprofit sector. She expresses her artistry through various mediums, from literature to visual, auditory, and performance art. Her visual art has been focused on the decorative arts using metals and fibers.
vicejoy.com 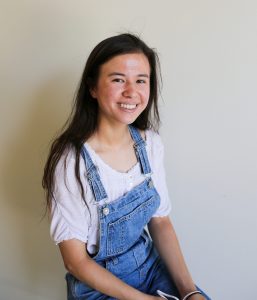 Isabella Whitfield
Isabella Whitfield is a multidisciplinary artist based in Northern Virginia. As a 2020-2021 Aunspaugh Fellow at the University of Virginia (CLASS ’20), she completed a year-long independent art study. Her practice explores the intersections between site-responsivity, performative labor, and environmental history.
isabellawhitfield.com