The Visual Arts Center of Richmond hosted the inaugural Richmond Public Schools (RPS) Youth Poetry Slam, a poetic ending to the month of April which is National Poetry Month. The grand slam was produced by the Writer’s Den, a spoken word collective founded by Richmond’s inaugural poet laureate Douglas Powell a.k.a. Roscoe Burnems. 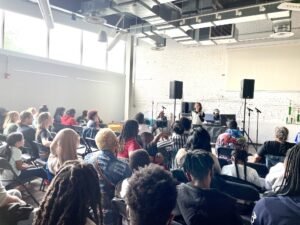 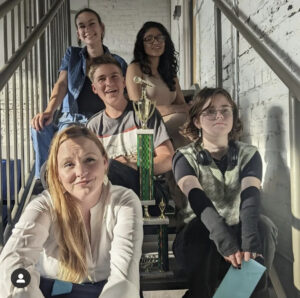 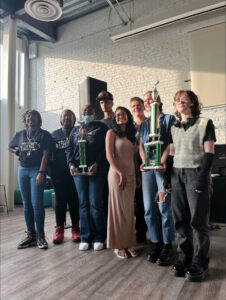 All eight RPS high schools competed in preliminary bouts to get to the finals, publicly performing heartfelt pieces in front of a packed house of friends, family, teachers and the general public. “Congratulations to all of the students who were brave enough to touch the stage and share their truths and sincere thanks to all of the coaches who helped shape these incredible students,” said Powell after the event.

Each of RPS’s eight high schools formed a team and worked with a professional poet assigned to them from the Writer’s Den. For nine weeks the teams led by their spoken word coaches worked on writing original poems and stage presence then met up at the Visual Arts Center on Saturday, April 30th to compete for prizes and bragging rights.

“Working with Roscoe Burnems on this event was such a great experience and the great music from DJ Mike Jay added to the exciting energy in the room,” said Clarissa Bannor, VisArts’ Marketing & Comms Manager, “creative writing and spoken word are meaningful creative art forms and we were thrilled to help The Writer’s Den bring that experience to RPS students through the RPS Youth Poetry Slam.”