Philadelphia-based jeweler Hilary Hertzler started her career in interior architecture and now she’s a full-time jeweler, selling her work all over the U.S. The Visual Arts Center of Richmond has chosen Hertzler as the featured artist for its 55th Annual Craft + Design Show, making her work the focal point of the event’s promotional materials.

It’s the second year that Hertzler has exhibited her jewelry at Craft + Design. In 2018, she took home the Martin-Star Cabinetry and Design New Artist Award.

“My jewelry-making practice started with getting laid off,” Hertzler said. “The architectural firm I worked for made it through the worst of the recession but it eventually caught up with us. There just wasn’t enough work to keep me on.” 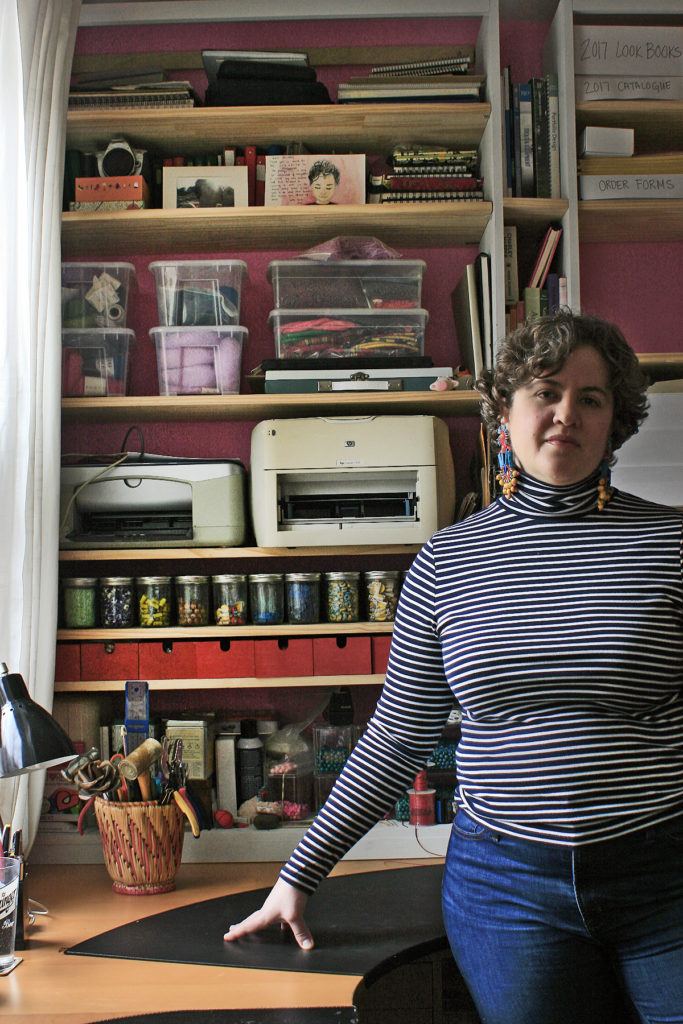 Hertzler joined the firm out of college and worked there for 11 years, designing spaces for clients like The Campbell Soup Company and Godiva Chocolatier.

“My time there really shaped and prepared me for what I am currently doing in that it helped me to develop a confidence in my own voice and ideas,” she said. “It was an incredibly collaborative and supportive experience for me – something I really needed straight out of college. It also, eventually, reminded me that I missed working with my hands.”

Hertzler grew up on the edge of Lancaster County and both sides of her family were immersed in the Pennsylvania Dutch traditions of the area. Her father is a retired dairy farmer and sculptor of massive wood forms. Her mother, a talented seamstress and baker, is also a retired elementary school teacher.

“I grew up with a lot of exposure to the Pennsylvania Dutch concept of the joyful work of the hand around me,” she said. “It was so woven into the fabric of my family and community that I didn’t even realize how profound of an effect it had on me and my own work.” 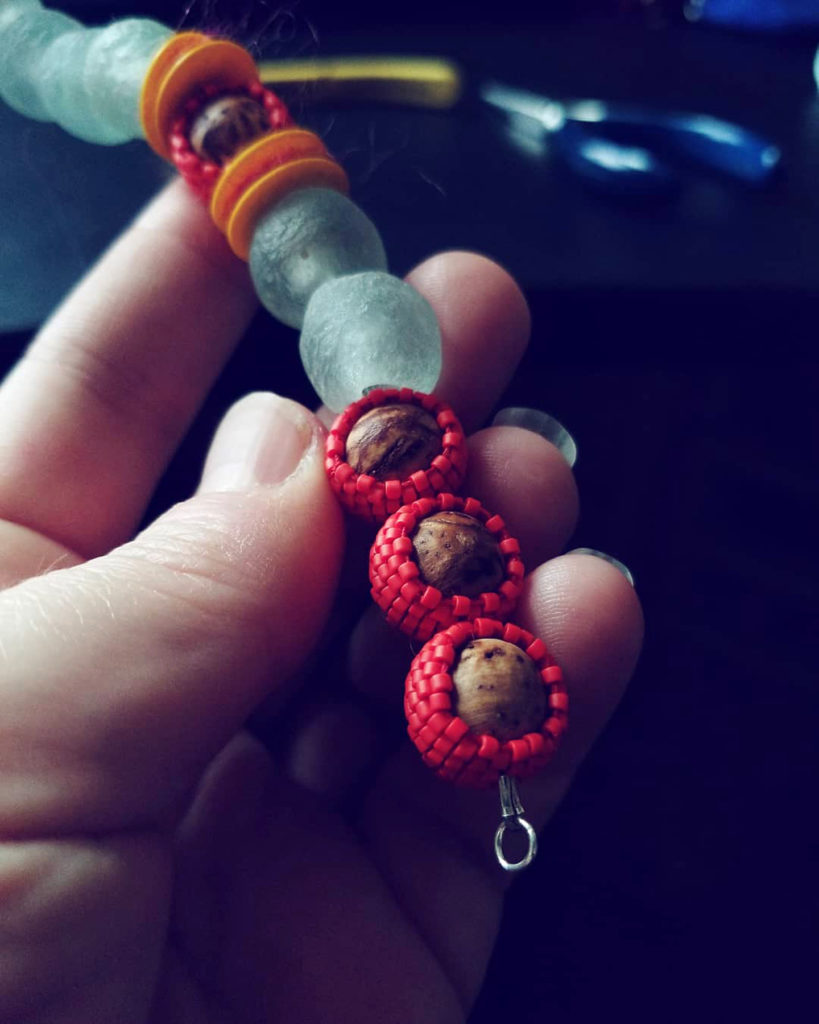 Hertzler started attending weekly open studio classes at The Sketch Club in Philadelphia, drawing from live models in charcoal. Inspired by the hands-on process of drawing, she rediscovered the physicality of art making that she’d missed during her career in architecture.

At the same time, Hertzler was starting to experiment with jewelry making, mixing fiber and beads. Some of her earliest materials were shank buttons, which were a gift from her former boss who’d inherited a large box of the perfectly spherical buttons with holes drilled through the bottom half.

“Those buttons were the starting point for the fiber work I include in some of my pieces,” she said. “I starting wrapping mohair and silk yarn around them and found this really cool effect that I just knew had (and still has) infinite possibilities.”

Hertzler’s first jewelry collection was made up of simple, one-strand pieces, but from the beginning, her work was a playful mix of materials, colors and textures.

As her skills progressed, Hertzler felt ready to take her jewelry to the next level, making it larger and more complex. She began experimenting with basic bead weaving techniques like the peyote stitch. 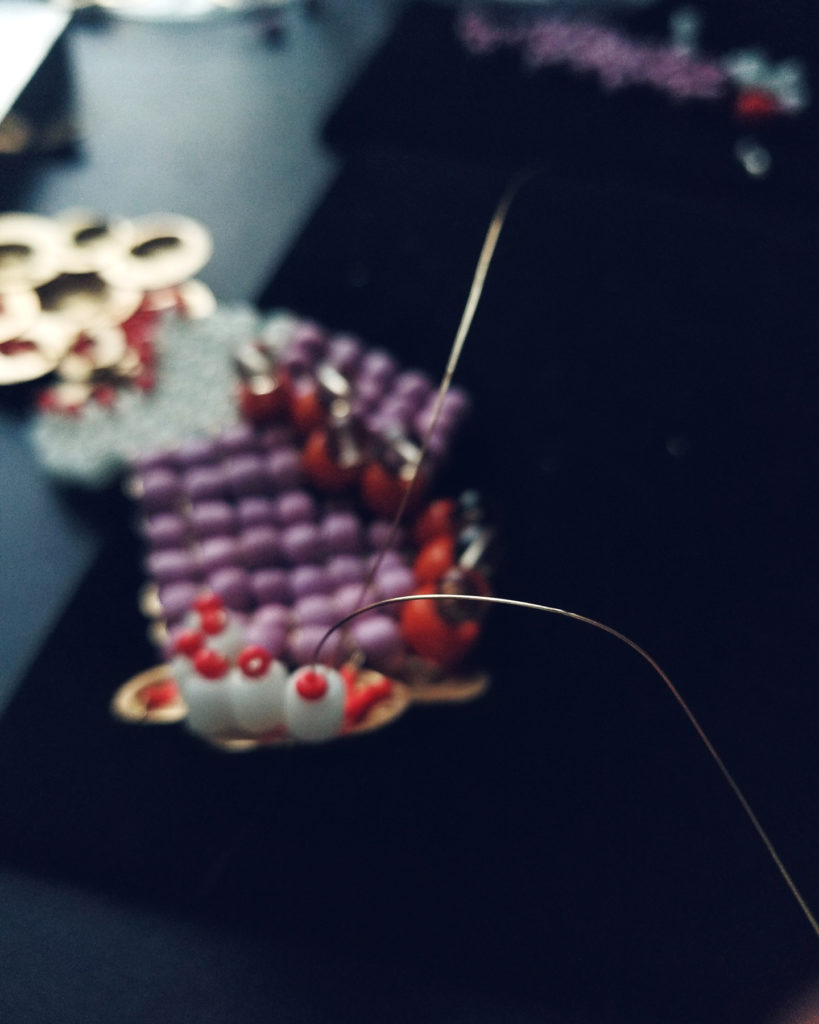 “Once I started to weave the beads, the possibilities really opened up for me,” she said. “I could layer. I could increase the scale. It really took off from there.”

Weaving beads allowed Hertzler to see that there was a crossover between her work as a jeweler and her work as an interior architect.

“Bead weaving is very much like space planning at a 2-D level,” she said. “It’s using line and form to work through a puzzle, trying to figure out how to get the pieces to fit and function while creating a cohesive vision.”

Collaborating with a Philadelphia-based potter, Hertzler now creates her own bisque-fired, clay beads by extruding, cutting, reaming and touching them up by hand. She supplements these handmade beads by sourcing wholesale from artisans in places like Nepal, Morocco and Brazil.

“My husband has family in Brazil, so I’ll buy some beads directly when we visit,” she added.

On her first trip to Brazil, Hertzler discovered acai seeds, which feature prominently in her designs.

“They are sold in every color you can think of,” she said. “I bought a bunch of them. I still love them for how well they take dyes, but I also love their imperfect shape. They are very light too, so I can bunch them together to give the illusion of bulk without the actual weight.”

Hertzler sources the fiber elements of her work from a shop located a few blocks from her tiny row house in downtown Philadelphia.

The artist’s typical workday begins with yoga, meditation and a walk by the river or a trip to the gym.

“The walk from my bedroom to my studio is only a few steps,” she said. “I really have to lay down a schedule for myself so I don’t get completely sucked in.” 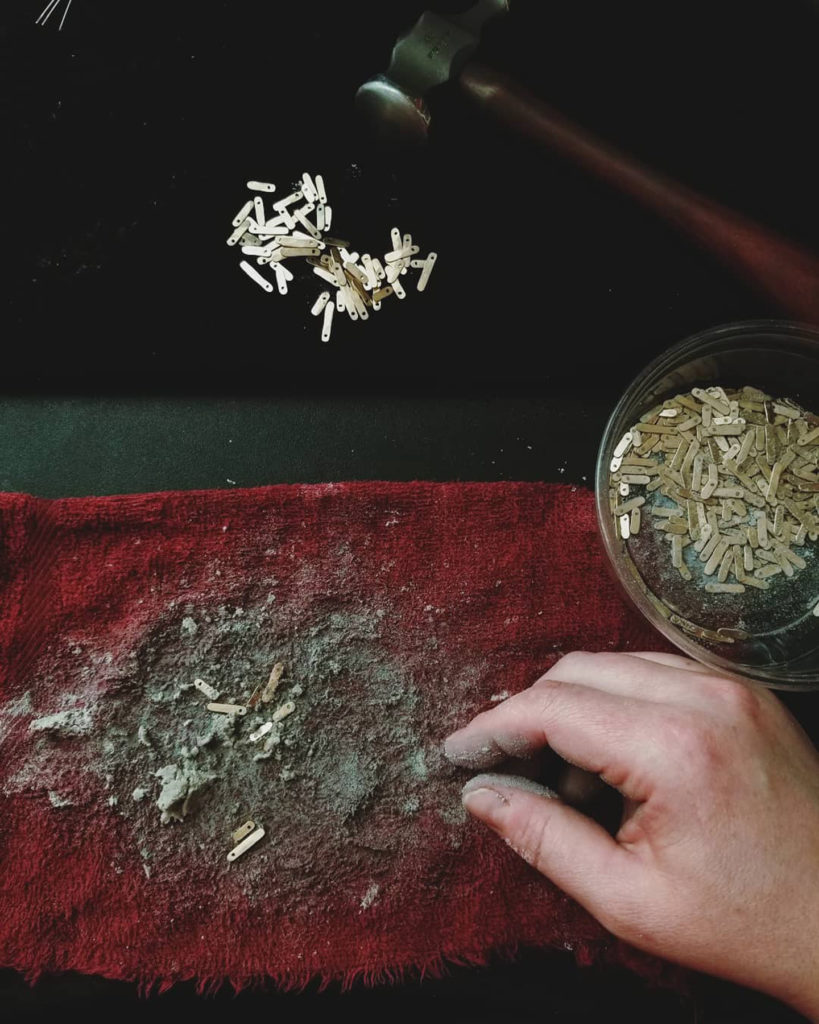 She’s at her workbench by 9 a.m., where she works until 7 p.m., only stopping around midday to make lunch.

“I’m a very happy solitary worker, but I do miss the collaborative open studio days of my college and professional past,” she said. “I would love to eventually move into a studio space. It would add a whole other level of community interaction that I think I would benefit from as an artist…and I could get a real metal working torch without worrying about burning down my house.”

Hertzler travels to between 12 and 15 craft shows each year, most of them in the Northeast corridor. Her favorite part of selling her jewelry at craft shows is seeing people’s faces light up when they try on one of her pieces.

“The reception my work received at the Craft + Design show last year was such a lovely surprise that it made me really think about expanding the reach of my work,” she said. “I would love to see how it is received even further South.”

You’ll find Hilary in booth #310 at Craft + Design this year. The weekend kicks off with the McKinnon and Harris Patrons’ Preview Party on Friday night, followed by the Rise + Shine Brunch on Saturday and two days of general admission shopping hours.