Yvette Wilson is a friendly and familiar face in the Visual Arts Center of Richmond’s fiber studio and at many of the community art center’s events. 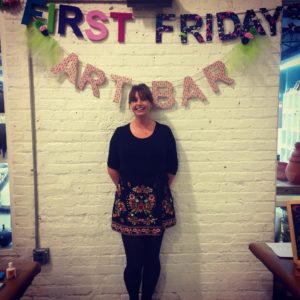 Wilson is also a studio monitor in VisArts’ fiber studio. Originally from Scotland, she has a degree in fashion design. She worked for Burberry in London, then moved to the U.S. with her husband a few years ago.

Wilson remembers the chance meeting that led her to get involved at VisArts. She and her husband were considering moving to Richmond from Washington, D.C., and on a tour of the city, they drove past the center.

“I remember seeing all the dress forms in the window of the fiber studio and thinking: what’s that place?” she said.

In addition to volunteering in the fiber studio, Wilson has also taken fiber classes. She’s enjoyed Sew Your Own Wardrobe, which she took twice, and Pattern Drafting and has recently begun branching out and taking digital design classes to learn more about Adobe Photoshop and Adobe Illustrator. Wilson is looking forward to taking more classes at VisArts this summer before traveling back to Scotland for a few months.

“It’s pretty amazing how much there is to get involved with just by volunteering at the Visual Arts Center,” she said. 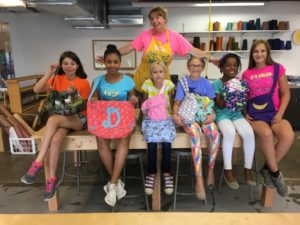 VisArts volunteers receive $10 off class tuition for every two hours they donate to the organization. Learn more about VisArts’ volunteer opportunities.