Get to know Jeff Vick, Sophie Treppendahl and Tyler Stoll. They’re artists in their own right and also the Visual Arts Center of Richmond’s studio coordinators, responsible for maintaining the center’s 15 professional art studios. This month, they’re particularly busy preparing for the launch of VisArts’ new studio access program.

This week, VisArts begins offering paid studio access to the general public. Until now, only students have had access to VisArts’ studios. Under the new studio access program, students will continue to be able to access the studios, free of charge, but people who are not students will be able to become a member of the center, and after taking a qualifying class or applying for a waiver, work independently in the studios. 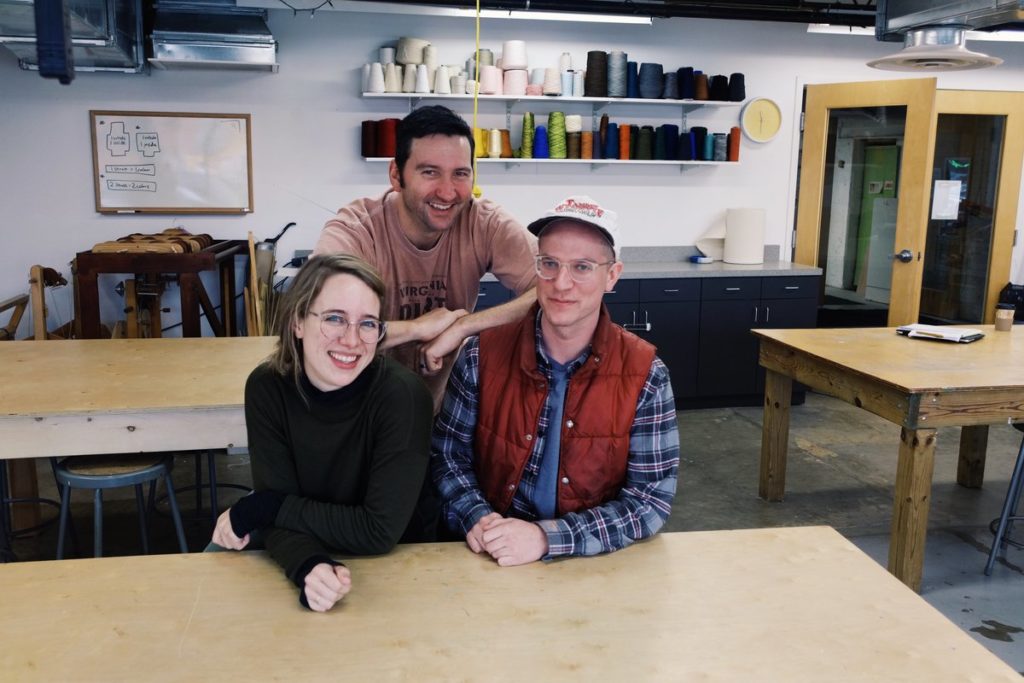 “When we decided we wanted to create even greater access to our studios, we knew we’d need more Jeffs,” said Stefanie Fedor, executive director of the Visual Arts Center of Richmond, referencing Jeff Vick, who has managed VisArts’ clay studios since 2008. “We’re also excited to have a group of knowledgeable and enthusiastic studio monitors to help us out during open studio hours.”

In addition to running VisArts’ clay studio, Vick also teaches classes and was the 2016 recipient of the organization’s Shelly Shepherd Master Teacher Award. His work—functional and decorative wheel-thrown pottery—is represented by Glave Kocen Gallery and can also be found at Shockoe Bottom Clay, Stewart Gallery and the VMFA Museum Shop. Students in VisArts’ clay studios have long seen Vick as both a resource and a friend, and Fedor and others hoped the addition of more studio coordinators would foster similar relationships in other studios throughout the building.

Stoll and Treppendahl joined the staff in 2017. Both have backgrounds in the visual arts; Stoll is a jewelry artist and Treppendahl is a painter. Stoll works in metal and clay and moved to Richmond after completing a Core Fellowship at the Penland School of Crafts. He has exhibited his work at Richmond’s VALET gallery space, the Baltimore Jewelry Center in Baltimore, Md. and the Lillstreet Gallery in Chicago, Ill. Treppendahl has lived and worked in Charleston, S.C., New York City and St. Francisville, Louisiana. She studied painting and printmaking at the College of Charleston and her work has been exhibited at The Southern Gallery in Charleston, S.C. and Gildar Gallery in Denver, C.O. In their roles at VisArts, Treppendahl oversees the drawing and painting, photography, digital, letterpress, and creative writing studios, while Stoll runs the wood, metals, fiber, printmaking, and glass studios.

For the last several months, all three studio coordinators have been sprucing up the studios, preparing them for higher traffic. “We’re excited that so many new people will be able to take advantage of the center,” Treppendahl said. “We’ve got great tools and equipment and a relaxed atmosphere.”

The coordinators say they’re anxious to see how the new open studio program will change the dynamic of their studio spaces. For much of the organization’s history, the studios have served primarily as classrooms. Now, each workspace will offer at least 10 hours of open studio access every week. People can pay for access by the hour, by the session (sessions are 11 weeks long) or by the year.

To prepare for the launch of VisArts’ open studio program, Stoll, Treppendahl and Vick recruited a bevy of studio monitors to monitor and maintain the spaces. Studio monitors volunteer in the studios for five hours per week and, in exchange, earn a free class and free studio access.

The staff hosted an Open Studio Happy Hour on December 13, inviting members of the community to tour the Visual Arts Center and learn more about the program.

Stoll says he’s glad Richmond artists will have more ways to access VisArts’ equipment. “I’m hopeful that the program will further diversify VisArts’ studio spaces and allow for communities of artists to grow alongside one another as they pursue individual projects,” he said.