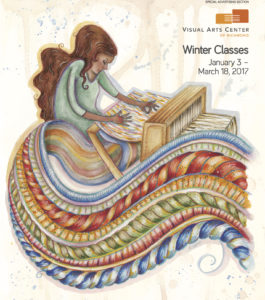 What do adult coloring books, infertility support greeting cards and the Visual Arts Center of Richmond’s winter catalog have in common? They’re all illustrated by Richmonder Holly Camp.

Camp has worked as a graphic designer and illustrator ever since she graduated from Virginia Commonwealth University’s School of the Arts in 2004. “Illustration was always my focus. I was definitely the middle school kid with the margins full of doodles,” says Camp.

Camp majored in communication arts with an emphasis on illustration. She got a job right out of school, working as a graphic designer, and began to take on freelance illustration projects on the side. Camp launched her greeting card company, Holly Camp Cards, in 2008 because she said she felt like she needed an additional creative outlet.

“I have a lot of fun with it, and it helps me feel super connected to my art in a really fulfilling way,” says Camp.

In the last six months, Camp has gotten a lot of positive press for a new series of cards she created for couples experiencing infertility. “It’s a topic you’re not supposed to talk about, and that’s just so unhelpful to those who may be grieving or struggling. I wanted to give people who want to show love and support an accessible way of doing that.”

All of Camp’s cards can be purchased on her Etsy shop but they’re also available at local shops like Ellwood Thompson’s, Orange, and Gather Home & Garden. As she’s gotten to know the wholesale market, Camp’s cards have started to pop up in gift shops as far away as Columbia, Missouri and Anchorage, Alaska.

The wholesale market is big business for creatives, which is one reason Camp decided to lead a special one-day workshop, “Wholesale Basics for Handmade Businesses,” at VisArts. The class, which runs from 10 a.m. to 4 p.m. on Saturday, February 11, will help students focus their product line and target their ideal market.

“One of the big things I’ve learned is that you just can’t stop trying. It’s true for illustration and also for establishing wholesale relationships. You have to start up so many conversations, hoping that a few of them will stick,” Camp says.

Recently Camp started a particularly big conversation with Random House. The result is that, in the last year, she’s contributed to three adult coloring books put out by the company’s WaterBrook & Multnomah imprint. “Whatever is Lovely” was released last winter, “God Bless America” hit bookstores in June and “Everything is Beautiful” came out in early October. Camp says the opportunity to work with a big four publisher has been one of the highlights of her career.

When staff at the Visual Arts Center of Richmond approached Camp about the illustrator-in-residence program, a great year got even better. “I chose to focus on weaving because I thought there was a ton of fun visual potential,” says Camp, who sat in on a warp painting class led by instructor Patrick Carter to be sure she had a good sense of how the loom worked.

The winter catalog is on Style Weekly newsstands this week. Copies are also available at VisArts’ front desk.

“I love and respect the work of the other artists who have illustrated these catalogs. When I stepped away from the project, it was important to me to be happy with what it looked like.”