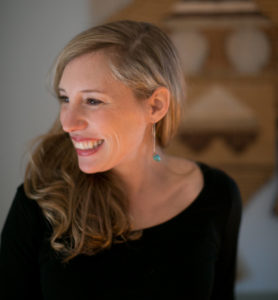 It all began with an illustration of the pope’s mitre, hanging on a hat rack.

Pope Benedict had just resigned and news outlets the world over were reporting on the historic event. Fabrizio, who considers herself to be a news junkie, was moved to create an illustration that captured the nature of the day. When it was done, she posted it to Facebook.

That illustration was the beginning of Wordless News—a blog the Columbia, South Carolina-based artist has maintained for more than four years. Each morning, Fabrizio wakes up at 4:45 a.m. and illustrates a news story she’s heard or read. She works on the illustration for just a few hours and posts it to her blog, with a link to the story that inspired it. Then she gets on with the rest of her day.

“It’s a good ritual,” says Fabrizio. “It keeps me informed, it helps me practice my technique and it keeps me learning.”

Fabrizio is big on ritual. In fact, she wrote a book on it. Cultivating Creativity: Daily Rituals for Visual Inspiration, which was published by HOW Books in 2014, outlines the routines she’s incorporated into her own artistic practice. For Fabrizio, her ritual includes writing a priority list at the end of each work day, going to bed early, waking up early, shutting off e-mail during the morning hours of 5 to 9 a.m. and skipping lunch—a meal that kills her productivity. Someone else’s ritual might look very different. The important thing, according to Fabrizio, is to have one.

In 2014, about a year after the launch of Wordless News, NPR reached out to Fabrizio. Some producers had seen the blog and they wanted to interview her for a story on Morning Edition, “Picture This: Illustrator Gets Inspired by the Morning News.” As part of the piece, Fabrizio was hired to illustrate a week’s worth of Morning Edition stories—one each day.

Fabrizio credits Wordless News with helping her establish a career in editorial illustration. Now she regularly works with newspapers, magazines and radio programs to illustrate news stories that would otherwise be devoid of imagery.

It’s the kind of career Fabrizio dreamed of when she was getting her MFA in graphic design at Virginia Commonwealth University. She wanted to study illustration but says she didn’t feel confident enough, at the time, to pursue it. Graphic design felt safer. “I’ve always had this intuition that my skill set was more in line with drawing and conceptual art, so I figured I’d try it and see what happened. I think your gut knows what’s the right thing.” 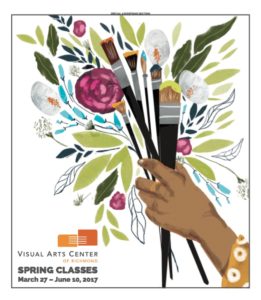 This winter, Fabrizio is launching a new illustrative enterprise called Ordinary Artifacts. People can e-mail her a photograph of an object that’s sentimental to them, and she’ll illustrate it. When the illustration is complete, she’ll upload it to Framebridge, a company that affordably prints and frames art. Fabrizio’s hope is that, once the transaction is complete, people will hang the art and feel free to let go of the object itself. “We want to live this minimalist lifestyle, says Fabrizio, “but we hang onto all these things and we put them away and don’t enjoy them.”

Fabrizio is the Visual Arts Center of Richmond’s fourth illustrator-in-residence. Artists who are selected for this program illustrate one catalog and are invited to lead a workshop or give a public lecture at VisArts. Fabrizio will teach a one-day workshop on editorial illustration, which is scheduled for Saturday, April 8 from 10 a.m. to 4 p.m. In it, she’ll lead students through a series of exercises to help them effectively communicate a specific idea in the drawing or water-based media of their choice.

The spring 2017 catalog is now available in Style Weekly and can be picked up at VisArts’ 1812 West Main Street location. All VisArts’ spring classes are also available to view online.