The Visual Arts Center of Richmond’s clay studio is among 27 ceramic studios and workshops in Richmond that will open to the public on June 4 and 5 to showcase the work of nearly 100 artists as part of the 5th Annual RVA Clay Studio Tour. This self-guided tour of Richmond’s clay community is the brainchild of Clayworks Supplies owner Scott Campbell and VisArts clay studio manager Jeff Vick.

This year, VisArts is the first studio on the tour and Vick has rounded up a group of twelve VisArts teachers, studio monitors and interns to display their work at the center. About half of the ceramic artists on the RVA Clay Tour have a connection to VisArts in some way either as current or past teachers or as former students. “VisArts has a significant presence in the Richmond clay community. There are lots of artists on the tour who are part of our clay family,” explains Vick. “Many of the artists participating in this year’s clay studio tour have either taught at or taken classes in our clay studios at some point and I’m excited to see the incredible creativity that will be on display during this tour, which is back on after a two-year hiatus due to Covid.” 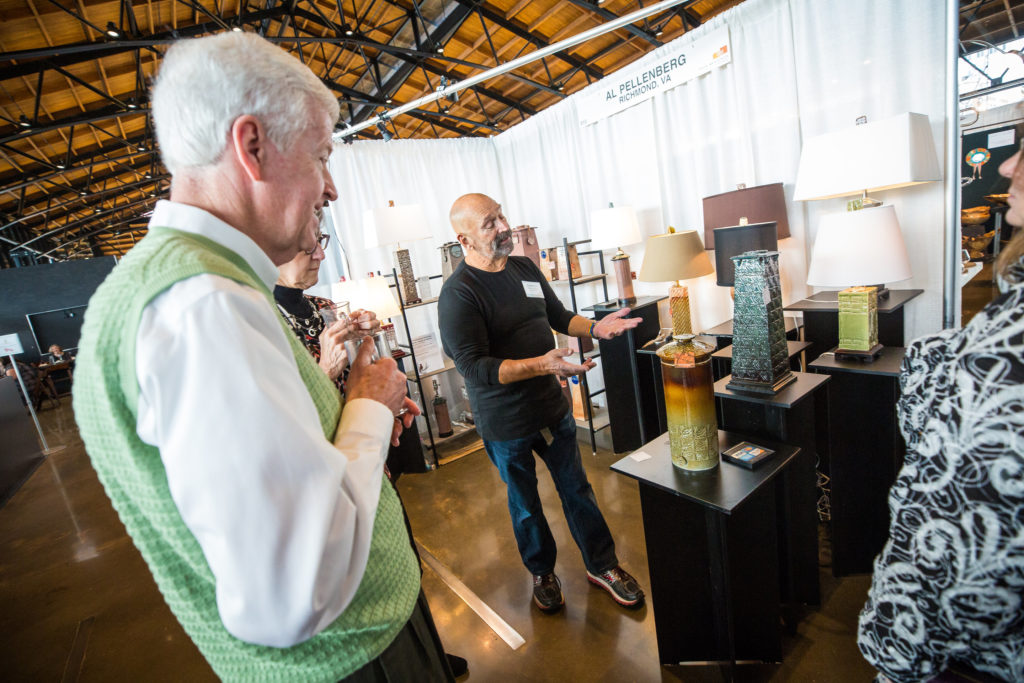 VisArts’ welcoming and inclusive environment is a major reason for VisArts’ strong presence during this tour. Al Pellenberg, a VisArts instructor and clay tour participant appreciates this characteristic of the center, “VisArts is very open and embracing. It is non-judgemental and people are respectful of each other’s work. My husband often says that we should make a studio at home, and I would say that I don’t want a studio at home because I like going into the studio and seeing, meeting and working with people.” Pellenberg has taught Slab clay-working at VisArts for the past 6 years, after moving to Richmond from Washington DC.

Johanna Gragnani is another VisArts teacher who will have their organic, whimsical, and playful creations displayed at Blue Dot Studios (studio #20) during the tour. Her work focuses on hand-building and creates organic forms that emphasize the process. Gragnani’s connections to VisArts and the clay tour run deep. After returning to Richmond from Seattle, Washington, Joanna rediscovered the Visual Arts Center and started taking clay classes there, as well as interning in the clay studio, “When Vick and Campbell started the tour, I was on that first email. I was also part of the Old Tavern Kiln Collective with a bunch of other students and teachers who built a wooden Kiln together,” Gragnani shares. “I like how helpful everyone is at VisArts in sharing ideas and techniques for what they’re doing. It just feels nice here.” Gragnani teaches hand-building at the Visual Arts Center and Hand/Thrown Studio, and she also leads mobile clay classes around Richmond in customers’ homes and businesses.

New to the Clay Studio Tour event this year is Kourtenay Plummer, a past VisArts resident artist and former clay intern under Jeff Vick. Plummer says she’s excited to finally be involved with the RVA Clay Studio Tour after hearing about it from her clay instructors at VCU and at VisArts, “I will be showing a lot of my ceramic jewelry which is kind of new, and vases too. I think it’s going to be a little different from what the RVA Clay Tour has seen. I’m really excited to see people and for them to see what I’ve been working on and hear what they’ve been thinking about from what they’ve come across.”